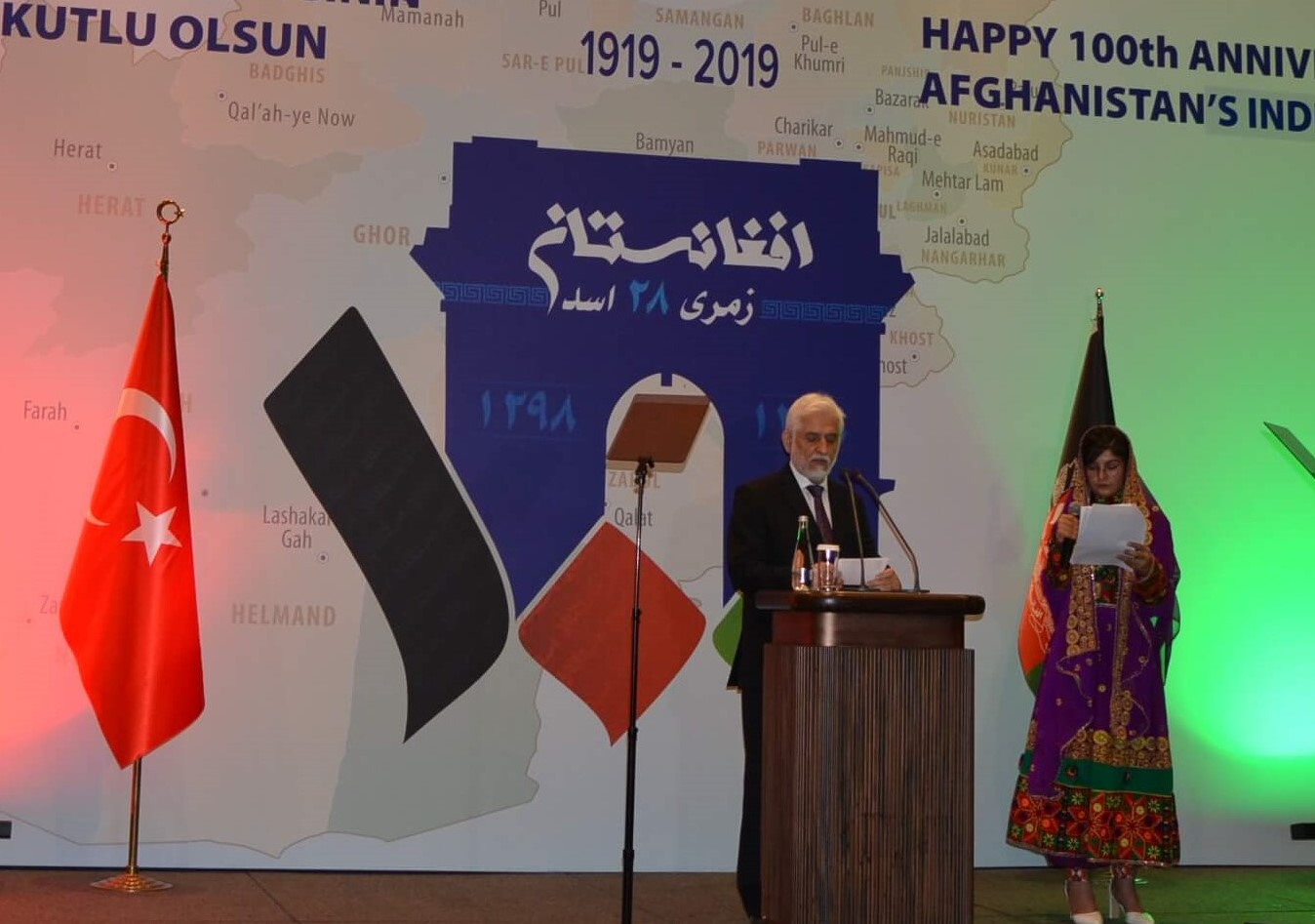 Before I begin with my speech, I strongly condemn the recent cowardly, barbaric and inhuman terrorist attack that took place on Saturday evening, 17 August 2019 in a wedding party in Kabul city in which 63 civilians were martyred and more than 180 others were wounded. We wish Allah’s mercy upon those who lost their lives, speedy recovery to the wounded, and convey our heartfelt condolences to the grieved families. We have strong commitment to fight terrorism and extremism. These heinous and inhuman terrorist acts will never ever stop us from a peaceful, stable and prosperous future.

Excellences, honored guests, dear friends and ladies and gentlemen.  I welcome you all to tonight’s celebration of the 100th anniversary of the Independence of Afghanistan.

As we celebrate our Independence, the people of Afghanistan still struggle to protect their independence, national integrity and values. We are endeavoring towards the goal of a safer and better life for every citizen of our country. Our progress and gains of the recent years would have not been possible without the support of our Allies, including the brotherly and friendly country of Turkey.  I would like to thank them for their support.

Though, the history of our diplomatic relations with Turkey begins at the beginning of 20th century, but our people to people contact, cultural and religion bounds can be traced centuries ago. Our brotherly and friendly relations have strong roots throughout the history and will remain strong for the coming years. The Strategic Cooperation and Friendship Agreement between the two brotherly countries recently ratified by the Parliaments of both of our countries will further strengthen this relation.

The brotherly nation and friendly government of Turkey have played a vital role in supporting the Afghan People and Government in various fields, including: Training of Afghan National Security Defense Forces, Education, healthcare, humanitarian assistance and reconstruction.

As a NATO member, Turkey has taken active part in maintaining security and supporting the Afghan National Security and Defense Forces in the fight against terrorism.

While our brave National Security and Defense Forces have been fighting the Taliban, the doors for negotiations and peace have always remained open. In the Kabul Process Meeting on 28 February 2018, our President H.E. Mohammad Ashraf Ghani proposed an unconditional peace negotiation with the Taliban. It shows our strong desire and commitment for peace.

In Consultative Peace Loya Jirga held in April 2019, 3200 delegates from across the country provided a roadmap to the Government how to engage in the peace talks with the Taliban. The delegates of the Jirga emphasized on important issues and stipulated the will and desire of the nation through a communiqué.  In the Jirga the delegates consulted and advised the government on the values and achievements that the Afghan government should not compromise on, form a comprehensive and diverse Afghan delegation for peace talks with the Taliban, take into account special characteristics of the delegates while selecting them and how should the Afghan government deal with the neighboring countries while engaging the peace talks.

As our government welcomes and fully supports the ongoing peace talks between the Taliban and the United States of America, we are looking forward for a direct peace talks between the Government of Afghanistan and the Taliban in the near future. As per the guidance of the Consultative Loya Jirga, a 15 member negotiating team which includes representatives from Major Political Parties, Civil Society and Women, has been selected for the Peace Negotiations by the Government.

In the past two decades, Afghanistan has gained significant achievements in different fields. We have come a long way and made significant progress in the field of education, healthcare, agriculture, urbanization, media, participation of women, human rights and etc. The people of Afghanistan will never endanger these gains, while negotiating with the Taliban.

Whereas the government is ready to begin peace talks with the Taliban, it has strong commitment to hold the upcoming presidential elections on 29 September 2019 as scheduled by the Independent Election Commission of Afghanistan. We hope that after the presidential elections, important and crucial decisions on the peace process and settlement shall be taken by the newly elected government.

I hope that peace and stability be maintained in Afghanistan and our country as a member of international community play its active role in the region and in the broader world.

Thank you for your attention!